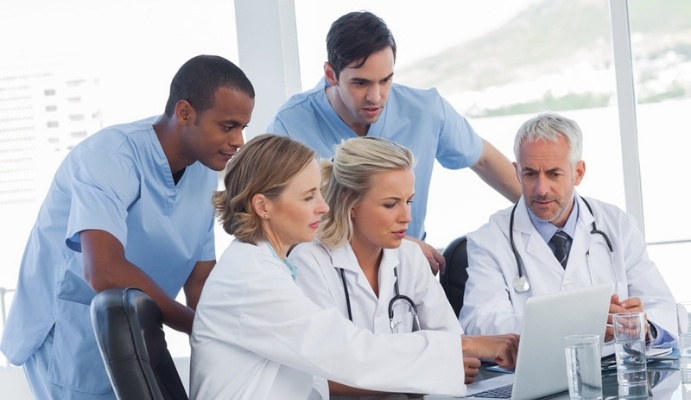 As an informaticist, could the expanded information about how a patient’s surgery was performed be connected to other existing data to look at whether the surgical technique contributed to patient outcomes?

If I were chunking this up into three informatics needs, all of which need to be present to some degree to get to the outcome that I was describing earlier, I’d say that number one is there needs to be continued advances in how we collate, curate, and link very heterogeneous, very complicated sources of data that ultimately allow us to link empirical information from the procedure itself to the late outcomes of surgery. Most of which don’t occur during the operating room — they occur the next day or the next week or the next month. If you can’t link measurable aspects of skill in the procedure itself to outcomes later, you just simply don’t have all the data that you’d need for that system to learn.

Once that data platform is in place, there need to be both statistical and probably machine learning-based tools that allow you to identify a subset of high-leverage maneuvers or skills that the surgeon is deploying and to be able to measure them and link them to outcomes in the most parsimonious way.

Obviously there’s a thousand potential micro processes that a sophisticated algorithm could pick up during the course of an operation. Machine learning could help us identify the most important four, five, or six levers and avoid information saturation with the surgeon by focusing on just a small number of levers to get better. It’s much the same way when you take a golf lesson. It’s generally a bad idea for the pro to tell you 14 different things that you should be doing different on your golf swing. You typically do it one or two changes at a time. I think there’s some aspects of that muscle memory in operative surgery as well.

Finally, there is a technology need to not only identify what optimal practices are, but ultimately to get them in the hands of the surgeon in real time, allowing them to modify the course of the procedure as it is being performed. As I think about it, there’s really two ways that that could happen. One way is simply a dashboard in the corner that blinks red when something is sub-optimal and allows the surgeon to self-correct. The second option would be something akin to autopilot, whereby for certain parts of the procedure, you’re letting the technology take over and letting the surgeon guide it and override it exactly as if you’re flying a plane or you’re driving a self-driving car of the future.

What is the prevalence of robotically-assisted devices in the OR and how is that field progressing?

That field is progressing really, really fast. The vast majority of community hospitals, at least those with at least 100 beds, have at least one robot. At the hospital that I was most recently associated with before I joined Sound Physicians, there were four robots that were used virtually around the clock in thoracic surgery, general surgery, urology, and OB-Gyn. It’s really been staggering to see how quickly robotic surgery has started to take over many of the biggest surgical disciplines.

There’s lots of reasons why that is. While we’re collectively on this big learning curve, it also creates this huge opportunity for digital technology to not only make it feasible to conduct more operations through minimally invasive techniques, but also to create this new opportunity for us to do those procedures better than we had in the past.

What steps would you take if you were personally facing a significant surgery?

Unfortunately, surgical patients have very limited publicly available information on which to choose a surgeon. I’m hoping that that may change sometime in the future as a corollary to what we’ve been talking about.

Right now, if I needed some procedure, I would stick with the tried and true techniques for identifying best surgeons. The first is that for whatever type of procedure I need — particularly if it’s one that is complex and/or high-risk — I would learn which surgeon had the highest volumes and specialized in those types of procedures. Both volume and specialization are hugely correlated with better outcomes with most procedures.

Second, I would ask my primary care physician about the reputations of surgeons for the sub-specialties that attach to the procedure I needed. There’s scientific evidence showing that traditional things like the surgeon’s pedigree — in terms of medical school and training — are very poorly correlated with outcomes. Hospitals are small enough places that a physician’s reputation is usually much better than not having that information at all. Even though it’s imperfect, it certainly will help you surface and help you avoid that small number of surgeons that are known to have poor skill or poor outcomes.

This article was originally published on June 11, 2018, by HIStalk. The original article can be found here.

Dr. Birkmeyer is a senior adviser on the caresyntax advisory board. As Chief Clinical Officer at Sound Physicians, he is focused on clinical quality, risk management, patient experience and cost-efficiency, and helps providers succeed in the value-based payment ecosystem. His research focuses on measuring and improving hospital outcomes, physician performance and cost-efficiency. Dr. Birkmeyer is a graduate of Harvard Medical School, and he completed his General Surgery residency and a fellowship in health services research at Dartmouth.