Are Falling Hospitalizations and Deferred Treatments a Hidden Cost of COVID-19?

By virtually every metric, COVID-19 is the biggest healthcare emergency of the last century. There is, however, a growing number of voices suggesting that it’s even worse than most people realize because the direct effect on public health may be dwarfed by the pandemic’s indirect effects: 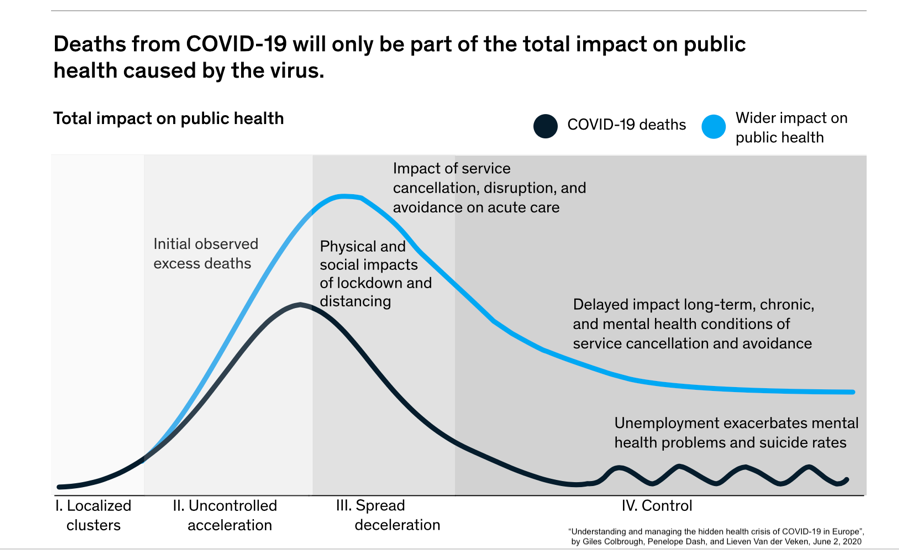 Among the most concerning indirect effects is the precipitous drop in acute hospital admissions, such as STEMIs (ST-Elevation Myocardial Infarction), COPD (Chronic obstructive pulmonary disease), and respiratory infections. One hypothesis is that this drop is due to patients being fearful of being admitted to hospitals in the midst of pandemic.

Health systems have also experienced a massive wave of cancellations of elective surgeries and procedures. The core hypothesis is that decisions on deferring patients for non-emergent procedures were not robust enough, and many patients needed the treatment.

We’ve also experienced necessary new norms of social distancing and working from home, as well as economic hardships due to lock-down of key service sectors of the economy.

Will isolation and stress change the course of mental health conditions? We’re going to find out, because many experts argue we will need to continue social distancing for the long term to beat COVID-19, even after a vaccine is available.

If the answer is yes, then will we see a protracted and “silent” healthcare emergency of increased mortality and morbidity for millions of patients?

And should governments incorporate this unintended but potentially lethal consequence into  decisions on stay-at-home orders and other virus mitigation measures?

Let’s figure it out.

One of the remarkable and widely reported facts in Q2 and Q3 of this year was a massive drop of hospital admissions. Dr. John Birkmeyer, who serves as the Chief Clinical Officer at Sound Physicians, recently published a relevant study in Health Affairs, which reported a massive 20-percent reduction in patient hospitalizations during the Q2 lockdown.

What is more alarming is the fact that the numbers from the last three months are still down by about 14 percent across the United States, meaning 5 million fewer Americans were hospitalized during this period.

So what is going on? The prevailing working hypothesis is that patients are avoiding hospitals due to fear of getting infected and as a result suffer from increased morbidity. Empirical evidence shows that patients with below average income and without health insurance are ones who reduced visits most.

However, Dr. Birkmeyer and his team reported that long-term observations this year do not support the hypothesis that there is longer-term adverse impact from the admissions drop. In fact, average acuity and mortality have not changed from pre-COVID times.

How can this be? There are two alternative scenarios.

Are fewer people getting sick ?

COVID lockdowns may be doing more than slowing the spread of the virus -- they may also be helping fight other diseases, too. For example, Australia and New Zealand reported a very mild flu season. It’s logical that social distancing can stymie other infectious diseases, but some may even go as far as to say that higher air quality may improve respiratory symptoms; or that the slowdown in economic activities leads to less stress.

This may be plausible, but does not seem comprehensive enough to explain why people with certain conditions haven’t gotten sicker despite paying fewer visits to their providers (especially those with severe forms of cardiac or respiratory disease).

Data suggests that telehealth has at least partially stepped into the gap in emergency treatment. The number of virtual visits have skyrocketed, and there is plenty of anecdotal evidence that the support was effective and in some situations (such as strokes) even life-saving.

During this time the health care profession is adapting to the needs of patients who cannot or will not visit providers as they would normally. Companies like Livongo are increasing virtual care options for patients with chronic conditions who need regular care, while others such as Harbor are offering greater access to mental health professionals through virtual channels.

Crucially there are also strong developments in home-based urgent care via startups like Landmark, Contessa Health, Heal, and Dispatch Health, which are finding ways to effectively replace face-to-face encounters with remote and home-based interventions.

Investors and entrepreneurs should take a closer look at this trend, as I think continued decentralization of healthcare is an enduring driver that is being significantly accelerated by COVID-19.

Some strong voices in the investment community, such as Ian Chiang from Flare Capital Partners, already emerged. Tracking the data presented by Ian and the developments in the startup community, it became clear to me that the rapid advances we are making on the digital front, creating virtual communication and decision-support tools, will not only produce direct benefit in the current hub-centered system of care, but will also enable and spur the physical shift of both brick and mortar infrastructure and physician services to communities and even to our homes in a more direct, point-to-point way.

Taking this into account, it is highly plausible that the findings of Dr. Birkmeyer on sustained quality of outcomes despite drops in urgent care hospitalizations have a lot to do with the ability of people to receive consultations and care in alternative settings during the pandemic.

What about therapy and procedure deferrals?

Telemedicine and home-based care delivery may have worked for the non-invasive treatments, but what about elective surgeries and emergencies?

Our data at caresyntax has shown that the surgical volume has dropped dramatically during the first wave, but has not truly recovered year to date: 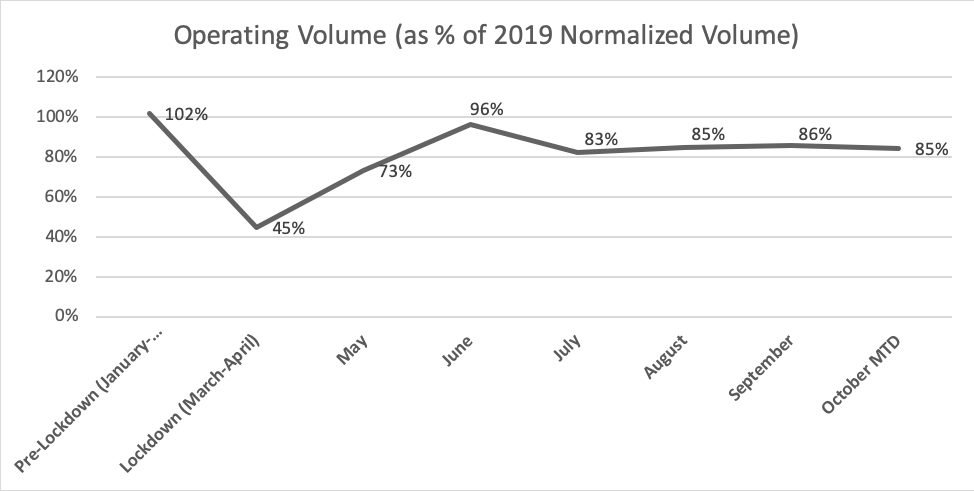 Where did these surgeries go?

Well, there is growing evidence that they are taking place, just not in hospitals, but rather in an ambulatory, decentralized setting.

The U.S. and global governments have supported this shift by enabling and creating incentives for ambulatory surgical centers to take on additional procedure volume, and there is evidence that it helped reduce the backlog.

It seems that similarly to the home-based urgent care, technological advancements by vendors such as caresyntax and others also did their part leveraging analytics and automation to support the pace and quality of clinical and operational decisions no matter where the procedures are held. It is now more feasible than ever to have an entirely safe surgery in an ambulatory setting.

Yet again, even in much more acute interventional settings, technology advancements coupled with efforts to move care closer to communities and patients are producing a positive clinical (and cost) effect.

The repercussions of COVID-19 will continue echoing massively through the global economy in the next few years, but I feel optimistic about the newly gained resilience of public health institutions and caregivers.

I started writing this edition fairly convinced that the backlog of surgical cases and reductions in ER visits is a massive silent tragedy in the making. Now I am not so sure. It seems plausible that much of the backlog and pent-up care is indeed being cleared, but in alternative settings , virtually or simply outside hospitals.

As such, in places like the U.S. or Europe, perhaps the wider impact on public health will not be quite as big and long-lasting as feared and described by many experts. Unlike many countries which are still on the path to modernizing healthcare, U.S does have the technology and financial capabilities to innovate out of this situation.

A lot is being said about this pandemic being handled sub optimally in the United States, and surely many hospitals or physician groups have struggled to adapt and exhibited vulnerability.

However, many did pivot rapidly (in healthcare terms), leveraging partnerships with innovative startups to adjust their model of reaching patients wherever they are.

And perhaps it was effective - rapid decisions to jump into larger initiatives based on telehealth, home-based care likely saved lives and kept the public health in balance.

They will also need to continue acting to resolve other key risks and bottlenecks, as they are doing by moving away from a complex centralized hub system to a more nimble and consumer-friendly point-to-point ecosystem.

In doing so, they will be increasingly accepting and empowered by decision support tools powered by data, and all things virtual.

And in the end, human ingenuity, compounded by the power of technology, will prevail because we have no other choice.

Acknowledgments: I would like to thank Dr. John Birkmeyer, Chief Clinical Officer of Sound Physicians, and Ian Chiang, Principal at Flare Capital Partners for their contributions in writing this edition

This article was first published on Linkedin on 22nd October, 2020

Link to the original article.

Dennis Kogan is the co-founder and CEO of caresyntax. Originating from a family of surgeons tracing back three generations, he possesses a keen awareness of the impact that new technologies can bring to surgical innovation. Dennis understands the challenges of the digital health industry, having co-founded and run two companies himself before co-founding caresyntax®.